The last global hardware selling charts just came out, and the Playstation Vita does not seem to be performing well.

The Nintendo 3DS is stable at 51.1M, followed by Sony’s PS4 and Microsoft’s Xbox One. The Wii U is further away from his rivals, standing at 9.2M copies sold. What really strikes though is the fact that the PS Vita is nowhere to be seen in the charts, leading fans to speculate if the portable console is doing well at all.

Sony has yet to release any official statements, but it was pointed out already by multiple fans that the lack of sales may or may not be directly correlated to the lack of exclusive Yu-Gi-Oh games for the system. 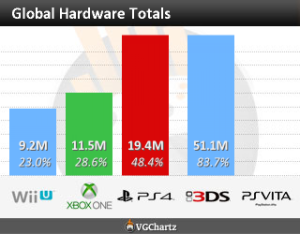